NOTE: this blog post was written for version 0.8 of the Karma test runner. An updated blog post for the new Karma 0.10 can be found here.

For my current project we are using Maven to build our AngularJS application. Furthermore we use Sonar (recently renamed to SonarCube) to monitor our code standards / best practices and unit test coverage. In this blog post we describe how to integrate the Karma (Testacular) test runner with Maven and how to add your AngularJS (or any JavaScript) application to SonarQube.

Basic integration of the Karma test runner in Maven

When I initially integrated the Karma test runner with Maven I used the Maven AntRun plugin because there was no Karma plugin for Maven at that moment. Luckily integrating Karma into Maven becomes much easier using the official maven-karma-plugin:

To generate HTML unit test coverage reports while running the Karma test runner we will have to modify the "karma.conf.js" Karma configuration file:

NOTE: this blog post uses the (old) pre-0.10 configuration file format of the Karma test runner. However when using version 0.10 all snippets (and sample application) should still be working. In order to generate the unit test coverage you will have to append ",coverage" to the <reporters> in the Maven POM:

The pre-processing of JavaScript source files dramatically alters the code, causing the line / column numbers of the altered code to no longer match the original ones. Therefore the stack traces of exceptions that occur while testing will also use those altered line / column numbers. Instead of always pre-processing the sources we could disable it at default by commenting it out:

Instead we use the Maven AntRun Plugin to generate a additional file "target/karma-coverage-html.conf.js" with those lines uncommented:

In order to use the generated "target/karma-coverage-html.conf.js" Karma configuration file you will need to add a <configFile> element to the configuration of the Maven Karma Plugin:

NOTE: Later in this blog post we will modify our Maven POM to generate an additional Karma configuration file for LCOV test coverage reporting and configure the <configFile> element of the configuration of the Maven Karma Plugin to use it.

Basic integration with SonarCube (no unit test coverage yet)

For a basic integration of your JavaScript code in SonarCube you will have to specify:

Additionally, in order for Karma "junit" reporter to work we will have to specify in the "karma.conf.js" file where the JUnit XML report should be generated:

NOTE: as it turns out the JavaScript plugin of SonarCube (as of version 1.5) no longer supports importing "unit test execution reports". More information can be found here (see answer of "Ronald") and here.

In order to integrate unit test coverage with SonarCube we will need to used LCOV reporting (instead of HTML). For this we need to add an additional <execution> section to our Maven AntRun Plugin configuration to generate an additional file "target/karma-coverage-lcov.conf.js" in which we also modify the Karma configuration to (only) output LCOV test coverage reporting:

The generated "target/karma-coverage-lcov.conf.js" file differs from the original Karma configuration file in that:

In order to use the generated Karma configuration file you will need to modify the (earlier added) <configFile> element in the configuration of the Maven Karma Plugin:

Then we need to tell SonarCube where to find the LCOV unit test coverage report:

NOTE: later in this blog post we present a more future proof to specify the location of the LCOV file that doesn't depend on the browser version in its path (like in this case "1.8" of "PhantomJS" on "Windows"). Configuring <sonar.javascript.lcov.reportPath> isn't enough to make SonarCube properly process the LCOV file. To successfully let SonarCube process the generated LCOV file we will add an additional <execution> section to the configuration of the Maven AntRun plugin that:

To demonstrate the integration of the Karma test runner in Maven and SonarCube I forked AngularJS sample application called "ng-directive-testing" in GitHub. After running a "mvn clean install sonar:sonar" (either from command-line or through Jenkins) you will see the following dashboard in SonarCube: 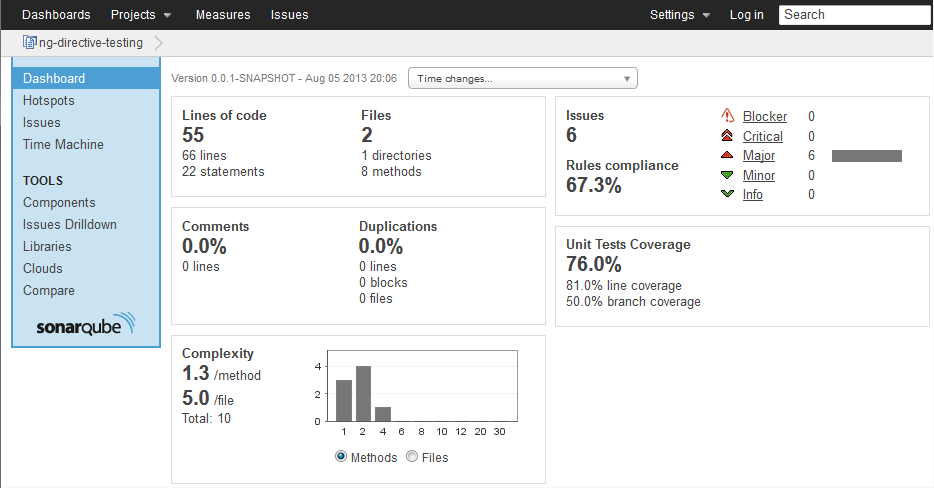