I am still settling down from an awesome week in Sweden, where I went for the JFokus conference and subsequent speaker conference. Both were of epic proportions, and I would like to share my experience of giving a presentation there that I would not soon forget. 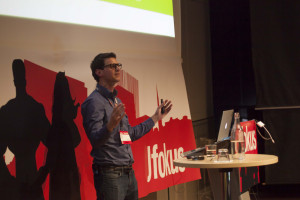 My presentation on Evolutionary Algorithms titled “Making Darwin Proud: Coding Evolutionary Algorithms in Java” was scheduled for Tuesday, making it a very special session. Not only was it the 10th “birthday” of JFokus, it was also the 1st birthday of my son Olivier. It was a tough decision to speak at JFokus instead of being at home to celebrate my sons very first birthday, but as my wife said “he’s not going to remember you weren’t there on the specific day…we’ll celebrate extensively before you leave for Sweden” (I love my wife). However, I still wanted to do something special for my boy, which led me to come up with the ludicrous idea of starting out the presentation by asking the audience (some 450 developers) if they would sing Happy Birthday with me while I recorded it with my phone. They did, and it was awesome! I would like to use this opportunity to thank them from the bottom of my heart, because they made the day, and gave my wife, Olivier and me so much joy by doing this. The tweet that followed is one of the most retweeted and liked I’ve ever had (as well it should be!): https://twitter.com/BWknopper/status/697107401686675457 After our singing intro, I felt a connection with the audience I haven’t felt before (and I gave this talk a couple of times) which in turn led to one of the most fun and relaxed presentations I ever gave. The abstract of the presentation:

Java Developers sometimes face programming challenges, such as creating a school roster or determining a salesperson’s optimal route, that are extremely difficult to crack using conventional approaches. Discover how Evolutionary Algorithms can be applied to solve these complex puzzles. The session starts with a success story from the NASA space archives to explain the concepts. Once the stage is set, it’s puzzle solving time! Learn to code Evolutionary Algorithms using plain Java - although existing Java frameworks such as JGAP are also addressed. The session concludes with a checklist that can be used to determine whether Evolutionary Algorithms are a good fit to the problem. With this checklist, the decision has never been easier!

http://www.slideshare.net/BasKnopper/making-darwin-proud-coding-evolutionary-algorithms-in-java-jfokus   The demo which I used to show that the code shown in the presentation actually works can be found on my github account and is very easy to set up. After the presentation there were several people that came up to me to talk further about Evolutionary Algorithms and showed genuine interest in the subject by asking some well-thought of questions (which I might use to write some blogs about ;-)). I also got some very positive feedback of attendees telling me they had enjoyed the presentation and that they were going to play with it (the biggest compliment they could give!). Some people used Twitter to voice their heartwarming opinion: https://twitter.com/utbrand/status/697107376860766209 https://twitter.com/tonycollander/status/697089955173179392 When the adrenaline of presenting at a big conference (and asking the audience to sing Happy Birthday!) settled down a bit, I FaceTimed with my son to wish him the best of first birthdays and show him and my wife what a legendary audience I’d had the privilege of presenting for. Then I got myself a beer…